skip to main | skip to sidebar

Here, you can find pictures, movie trivia, and everything there is to know about Pandora and all of it's inhabitants. 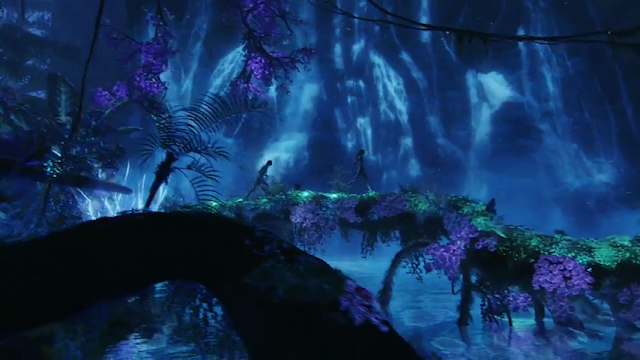 At Caltech this past Tuesday, James Cameron got together with heavy-hitting scientists to discuss the science behind Avatar.  Cameron explained his theories behind giant flying dinosaurs, floating rocks, and space travel with assembled specialists.  He was quick to acknowledge that the film is science fiction, but the explanatory “reverse-engineering”, as he described it, occupies a staggering 400 to 500 pages on the film’s wiki.

Some things, like the science of unobtaniam, was consciously designed from the beginning (in case you didn’t know, it’s a room-temperature super conductor used in yet-to-be-built fusion generators).  Others started with a “cool image,” like the moon circling a blue gas giant or men jumping out of hugheys (not the first time Cameron has tackled images of Vietnam in Sci-Fi).  When a reporter mentioned the “Epic” story, the directory quickly pointed out that many films attempt a mythic arc but are unsuccessful.  When asked for an example he said, “Krull.”  The student asking had never seen it. Whether or not all the pieces fit, it became apparent that Cameron really knows his engineering/physics/botany/biology/etc.  He waxed scientific on everything from undersea thermal colonies to high energy magnetic systems.  Cameron also mentioned what his future film plans might be.

Cameron was joined at the panel by Jess F. Adkins (Geochemistry), John P. Grotzinger (Geology), Jared R. Leadbetter (Microbiology), and Robert Hurt (Astronomy).  Before the scientists revealed their impressions of the film, Cameron reminded the audience that it’s science fiction and is meant to create a sense of wonder.  His priority was to make a compelling story, and then to create a scientific backstory to back up the film’s evocative images.  An example is the blue Na’vi, admittedly inspired by Hindu philosophy.  Cameron even wanted multiple arms but that proved too difficult for the actors.  He went with blue and invented backstory along the way.

SPACE TRAVEL
One of the first items addressed was the opening sequence with the spaceship ponderously drifting through space.  Cameron said that he wanted to have the spaceship travel below the speed of light, to avoid “warp speed” and other standard tricks that ignore Einstein’s scribblings.  His craft is propelled through the chilly void by a beam of energy, shot from earth of course.

This causes the ship to approach obscene velocities, but still not enough to span the galaxy.  But that lead to another problem.  If a spaceship can’t travel through a new-rave dance party on its way to work, then its final destination had better be pretty damn close.  They made it as close as possible.  Pandora “exists” in the Alpha Centauri system, the nearest to earth at a paltry 4.5 light years.

UNOBTANIUM?
Unobtanium has actually been around for a while as a euphemism used by disgruntled, budget-strapped engineers.  Cameron co-opted the term for use in the film.  The “hard” science of Avatar envisages unobtanium as a really, really expensive room temperature super-conductor.  But in an interesting aside by the director, he said its main function was metaphor.  Whether it’s furs, gold, or spices, “there’s always some damn thing that some group needs that some group has, that causes them to get in a ship [go there]... and shoot them.”  Cameron then said that the aforementioned summary is the past five hundred years in a historical thumbnail.  Everyone clapped.

JUNGLES AND FLOATING ROCKS
The scientists really started to speak up when the discussion got out of space and into the glowing jungles.  Grotzinger, a geologist for NASA, asked about the dearth of volcanoes.  Cameron responded, “sequel, sequel…”  In fact, they had planned a lot of Volcanism, but it got lost among deadlines and art-departments.  The molecular biologist, Leadbetter, said he got really excited when he saw the soldiers put on gas masks.  Cameron explained that the air of Pandora is toxic with sulfides (as one scientist pointed out, that would produce one hell of an acid downpour).  The air is also very dense, otherwise the creatures we see flying so gracefully would fall to the rocks below.  As for the floating mountains, well, they’re held up with magnets.

The magnetic field around the Tree of Life is so strong that it lifts the nearby, Unobtanium enriched rocks into the air.  Cameron acknowledged one of the slight problems with this idea is that such a field would be so strong it could rip the hemoglobin right out of your skin.  Spontaneous self-explosion does require a certain poetic license.

SCIENTISTS ARE GOOD GUYS
Throughout the dialogue, the scientists expressed their gratitude that Cameron hadn’t portrayed them as “Ted Kazinski” while simultaneously creating a palpable sense of wonder and discovery in the film’s characters.  Cameron agreed that he’s, “...tired of hollywood showing scientists as evil or boring lecturers”, and going further, that they have, “...poetry in their souls.”  It was fascinating to watch the director trail off into latin-speak and sea floor terminology.  Hard to follow at times, but there was a clear sense of mutual respect.  Moreover, it was relieving to see a filmmaker, who cares so deeply about knowledge, engaging with university personnel and scientists.  When Cameron later fielded questions from students (ignoring some of the older, established journalists), he brought an informed opinion to bear on each climate/environmental topic, even occasionally, and courteously, correcting the questioner.

SEQUEL
Cameron is aleady planning a sequel.  He plugged Fox’s Avatar Tree Initiative (which, regardless of how cynical you may be, is a good thing).  I doubt that Murdoch, or whoever, would be interested in a post-facto environmental PR event unless there was some Avatar promo value. After all, they are planting a million trees.  Cameron was quick to point out that even one million was a drop in the bucket.

After the panel I asked Cameron if he would return to films with darker themes, after the environmental victory of Avatar.  He said that he is really interested in developing the world of Avatar and working on the story, then quickly added he hasn’t officially decided yet.

courtesy of   http://blogs.indiewire.com
No comments:

rogersc
I am an emerging artist from the East Coast. I graduated from the University of the Arts with a BFA in Crafts; my specialties are Glassblowing, Art Jewelry, Painting, and Ceramics. I live on a sprawling farm with my beloved pugs where I make my art and play in my garden.